On July 1, I decided to participate in Camp Nano. I had done it a few times in the past, but this time around, I was just not planning to do it because I was planning on starting to write book six on July 15. Things worked out better than I anticipated and on the day of July 1, I signed up for it.

So what is Camp Nano? It’s a writing challenge of a sort. You decide to write or edit something, you set up a word count goal, and you try to achieve it. It’s different from the National Novel Writing Month as in November; the goal is set for you. Camp Nano is held twice a year in April and July. For more info, visit their website at www.campnanowrimo.org.

So now, back to book 6, which is pretty significant since it’s the last one of the Gray Eyes Series. It’s going to be released in September 2018. So why do I talk about it now? Because it’s going to set the tone for the next three series, The Blue Eyes Series, The Green Eyes Series, and The Brown Eyes Series. For the longest time, I knew who the characters were, I kind of knew the settings, and I sort of knew how it would finish. What I didn’t know was where I was going with my universe. I knew the importance of the Gray Eyes Series characters, but what I didn’t know was how to have other characters fit into the storyline… or where the storyline could go.

Then, on April 2, I was coming back from I don’t know where, and it hit me while I was driving on Beltway 8. All of a sudden, I knew where all my series would end up going. I knew the premises of all the series, and I knew the endgames. All the series, like The Gray Eyes Series, will essentially remain romances, but the overall universe will turn a little bit darker. Think about it as the “beginning of a dystopian world.” Yep, that’s where I’m heading. I hope you’ll head there with me too.

Here is a picture of the road from Jal, NM to Kermitt, TX. Jal is the initial setting for Book 6. 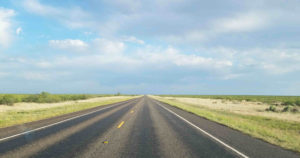