I struggled because it has been 4 days and I’m still trying to put my head around what happened at the photoshoot for the book covers of the six books of my Grey Eyes Series. All those wonderful moments I want to savor and keep to myself…

At first, I was thinking about telling you how I recruited my wonderful models: Lexi, Michaela, Megan, Haley, Damen, Nicholas, Christopher and Lennon, but then, I got bored writing it because I could not do justice to the stories that went with recruiting them all.

Then I thought I would write a play by play of the day. But who wants to hear that, really? I mean, they all came, everybody was on time, everybody did what they had to do, and we finished forty five minutes early. The end. Boring, right? Well, not necessarily.

There were these little gems of moments that still make my heart swell just at the thought of it.

“Martine, who is the girl I don’t like?” Damen asked, standing between the gray screen and my awesome photographer, John E. Faught.

Here I am, standing with parents and friends, looking around trying to find out who he could possibly be talking about. I saw Lexi and Haley standing nearby, and wondered for a moment if either of them had done something to the poor guy. Then I thought to myself he just met them, how could that be possible?

“Who are you talking about?” I finally asked.

“The girl, in chapter two, the girl I don’t like.”

Now, two things happened: 1- the light bulb went on in my head that Damen had stepped into Malakai’s shoes and was in fact talking about his character. 2- I also realized that Damen had read the two chapters I had posted on my website. What a warm and fuzzy feeling that gave me!

Of course, Damen was talking about Zoe and no, she wasn’t in the photoshoot.

Lennon had to leave for work so we tried to make it as quick as possible for him. I think we were so worried he would be late that we sent him on his way too quickly. He was done and gone when my photographer showed me the pictures. They were great, but Lennon and Lexi were standing too far apart, which wouldn’t work on a book cover. Thankfully, one of my friends had his mother’s phone number. So we called, and called and finally got through to her, hoping Lennon was with her. He wasn’t and she couldn’t reach him. She thought he was heading to one of the local restaurants for lunch.

So I recruited my best friend Dawn to go and run after him. As she was punching the address in her GPS, we got another phone call: Lennon had been found and was on his way back. He did a second shoot and left again. I looked at the pictures and, difficult me, I still wasn’t satisfied. I got lucky this time; he was still in the parking lot. He came back again and did more photos. I felt bad for poor Lennon but he is quite a wonderful guy and took it all in stride. Now, I haven’t seen the last batch of pictures; my photographer didn’t want to show them to me 😉

I was sitting on my wonderful makeup artist – Andrea Schutter Riebeling – chair, getting my makeup done for my own author photoshoot when Megan came running, a bounce to her steps, Michaela right behind her.

“Mom!” she called. “I so know what I want for Christmas.”

Her mother walked to us, albeit more slowly.

“What do you want this time?” she asked.

Megan was so excited by it all, she was contagious! She made us all excited about the idea of cool makeup for the next day, nevermind that I don’t normally wear any!

So now that the photoshoot is over, I miss my models. It was so much fun, I would redo it all over again just so we can all hang out. I think some of them would secretly want that too. They were just so good, better than anticipated, and I bet they did even better than what some professionals would have done. But most importantly, they are authentic teens you would see in the corridors of any high school, which is exactly what I wanted and needed for my books.

So, to all my team, my friends who came, the parents who spent the afternoon and my wonderful models, thank you.

My best friend Dawn and I 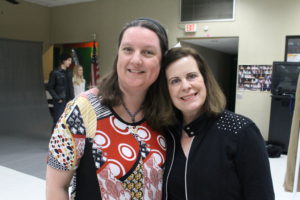 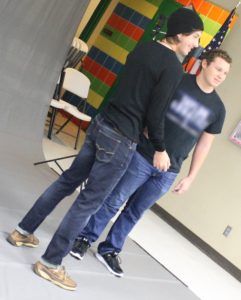 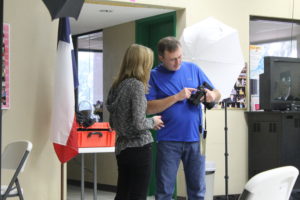 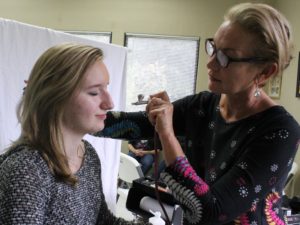